· A torsion box is a structure that is stiff, light, flat, and stable.

(Furthermore, can be constructed from floppy, low-grade materials.)

· Consists of two skins and a spacer: 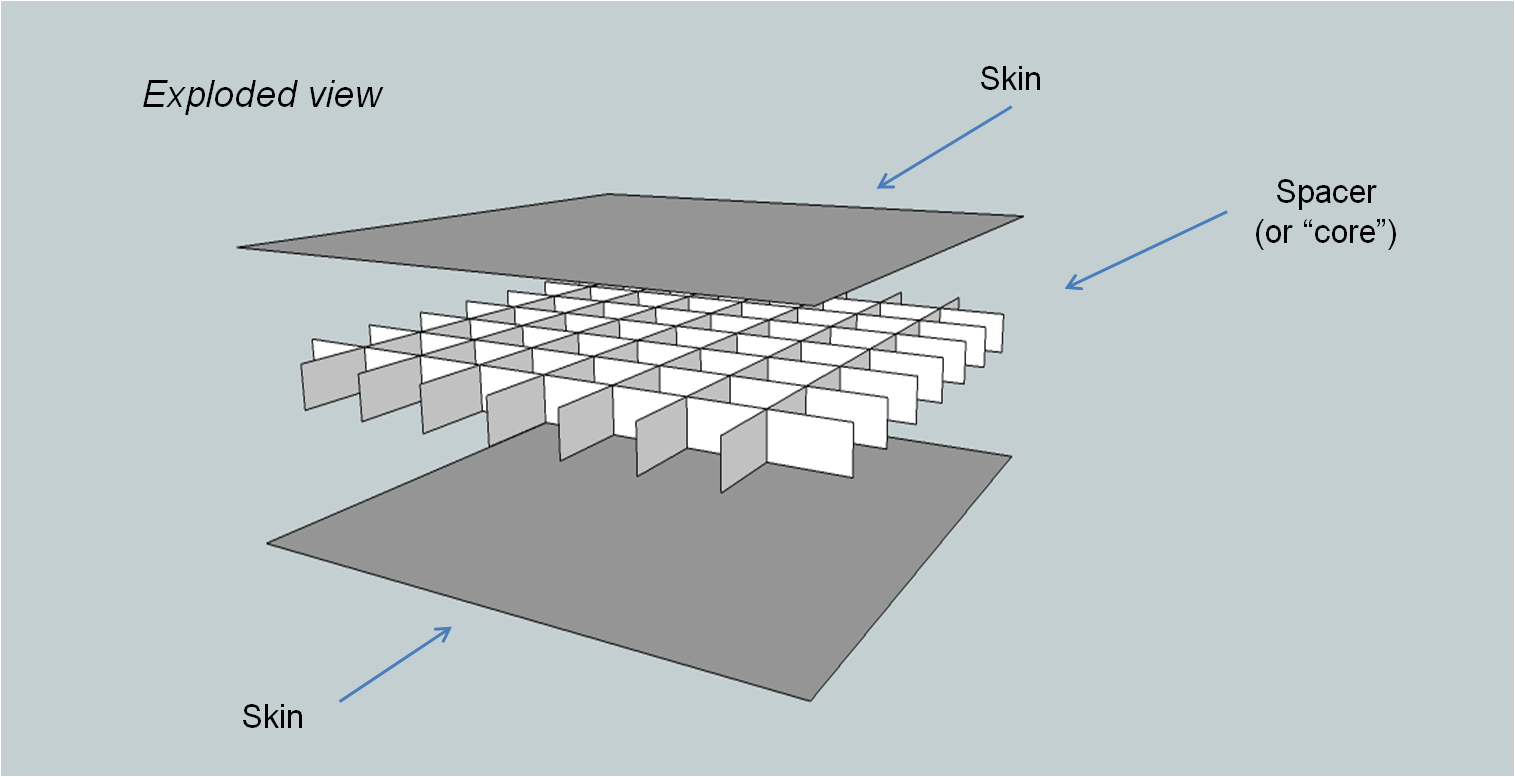 Shelves (with a long span between supports)

We can remove most of the beam's interior without changing its stiffness very much. The only requirement is that we leave enough interior material so that the outer surfaces cannot collapse toward each other when the beam is bent. A torsion box can achieve almost all of the stiffness of a solid beam even though it is mostly air.

MDF (Plywood is stiffer and lighter for the same skin thickness.)

Generally include solid-lumber edge for appearance or for joinery to other components.

2) Make grid (or whatever spacer will be). I cut long strips on the tablesaw, being careful that the strips are straight and the same width. Then I cut slots part-way through the strips so they'll fit together in a grid. Clamp the strips into a bundle with stretch-wrap, and gang-cut the slots.

The slotting doesn't have to be fine; you just need the strips to form the grid without colliding with each other.

3) Make the lumber edging, making sure it is straight and the same thickness as the grid.

4) Glue edging to one skin. If the edging is not tall enough to ensure that it stays straight while you're gluing it, use a straight caul to help. Can use mechanical clamps here.

5) Glue grid to that skin. Use a sheet caul (like plywood) and weights.

6) Shim assembly at the corners to remove twist. This is the only crucial step in the process. If you glue on the second skin while everything is twisted, the resulting torsion box will be twisted too, and you won't be able to untwist it. More on untwisting later.

7) Glue second skin on. Again, sheet caul with weights. Use caution with the weights

You want enough weight to get the skin tight to the grid and edging, but not so much that you bend the box.

a) Flat reference surface. In my shop I have an assembly table that itself is a torsion box. Using the crossed-string technique below, I built it flat. It now ensures that all subsequent torsion boxes I build are flat.

b) Level. If all four edges are horizontal, they must also be in the same plane; that is, they're not warped. You can put a level on each edge and shim the corners until the levels are all are horizontal. If you have only one level (like most of us), you can work one edge at a time, but you'll find yourself readjusting each corner several times.

c) Winding sticks. Classical technique, but not as sensitive as the crossed strings.

d) Crossed strings. Run strings from corner to corner so that they form a big X on the subassembly. Place equal-height spacers under the strings at each corner so that they don't touch the grid. In addition, for the string that crosses over the other, add shims at the corners which are exactly the thickness of the string. Tension the strings to remove sag. When the assembly is flat, the strings will just kiss at the crossing point. I use monofilament line for my string. This technique is very sensitive. On a box which is 24"x75", I can see the effect of putting just one business card under one corner of the box.

This discussion has been about how to make flat torsion boxes. However, it is easily possible to make curved torsion boxes. Make one set of ribs in the grid curved, and the torsion box becomes barrel-shaped. Gluing on the skins gets a bit tricky, but it can be done. And although I've pictured rectangular torsion boxes, they can be round or any other shape you want.