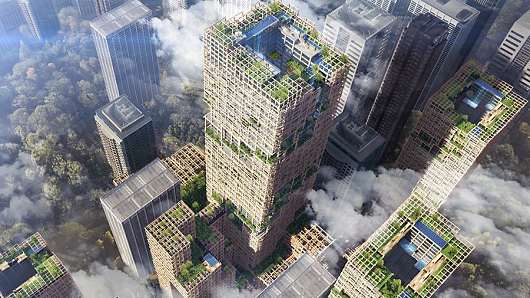 Our world, that is our world that involves wood, is changing fast. In the June 2016 I commented in our newsletter on Canadian plans to build 34 story "Plyscrapers" in British Columbia . We heard more on these developments last year when Chris Gaston, PhD Associate Professor, Facility of Forestry University of British Columbia, talked to us about the forestry developments in Canada that were supporting the building of even bigger wooden buildings. Recently the Sumitomo Forestry Company in Japan announced plans to build a 70 story building in Tokyo with 90% of the building made from wood. It is related to their "W350 plan" which aims to create a better planet by encouraging the growing and using trees from sustainable forests and making the world healthier by securing more CO2 absorption volume.

The meeting was called to order by President Frank Ramsay at 6:05 PM.

Guests were introduced as Yaseeen, Stan Booker's grandson visiting from Folsom who does some wood turning

Chris Pribe, who has done woodworking in the past and plans to do more now.

Gordon Juro who has been a BAWA member in the past.

Next month the speaker will be Mark Tindley talking about Greene and Greene tables.

The speaker at the April meeting will be Scott Wynn talking about metal parts for your woodworking projects.

May 18-20 will be the dates for the Biennial Woodworking Show to be held at the Woodcraft store in San Carlos. The show committee met for the first time before this meeting and will be reporting soon. Mike Tracy has agreed to chair the show and the goal will be to attract more student entries.

The speaker at the June meeting will be Tim Killen talking about Sketchup, and in July Bob Darr will talk about wooden boat-building.

Frank mentioned that Autodesk has a residency in SF and will be holding a seminar on Autocad on Feb 27th.

Bruce Powell presented a cautionary tale from Robert Bouchon, a very experienced woodworker who injured his fingers while using a jointer. He urged everyone not to work when they are tired or distracted.

Stan Booker announced that he has commercial shelving and shelf standards to give away. Contact Stan if you are interested. 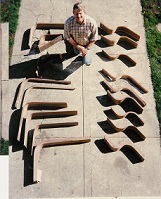 This subject was a project that took Bruce 9 years to complete… a cabinet with curved glass and an unusual footprint to fit into a small space in his living room.

The project first involved having a piece of glass custom molded to the shape he wanted and then steam bending and laminating the frame parts to fit around the details of the bent glass. The rabbets to hold the glass had to be hand chiseled to allow for the waviness in the glass. The curved steam bending forms were fabricated out of salvaged 6x6 lumber cushioned with cut-up inner tubes.

The frame joinery was mortise and tenon.

The curved cabinet elements were formed by coopering them up out of segments with slanted edges and then refining the surface using a router mounted on a track formed to the desired curvature. The project was glued with a 2-part resorcinol glue that is no longer on the market. 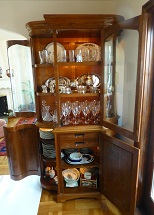 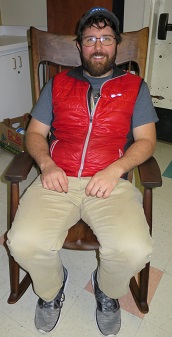 The second featured speaker was Aaron Blohowiak who described the process of constructing 2 Maloof style rockers from purchased plans.

The project required 100 board feet of walnut and was done with hand tools, a bandsaw, a router table, a lathe, and an angle grinder. With the Maloof design it is especially important to take account of grain orientation when laying out the parts to avoid failure and tearout. 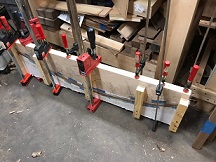 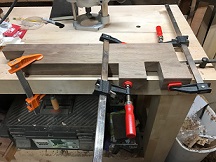 The glue-up was done with tinted West Systems epoxy.

The seat was formed using an angle grinder with a Holy Galahad fine bit. Aaron found the coarse bit too uncontrollable for this type of work. The rockers were laminated and the project was finished with 3 coats of Tried and True. 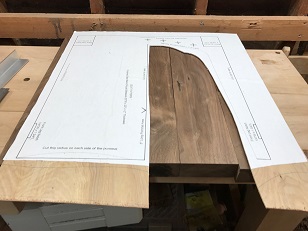 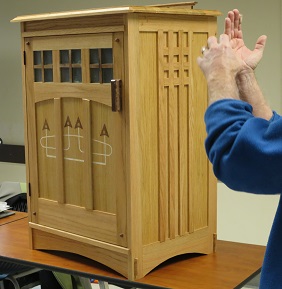 After the break Ken Napior showed an Arts and Crafts style cabinet he made of oak using through tenons for joinery. The doors had inlays consisting of walnut and sheetrock mud. The tenets of the Arts and Crafts movement were: design, materials, construction, joinery, decoration, and finish. 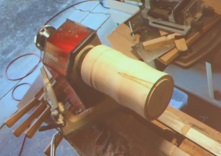 Next Jon Kaplan presented a Show and Ask about how to best construct a wooden container for an 8 pound steel cylinder weight for his wooden clock. Jon made the version he showed by first drilling out most of the material in a wooden cylinder with small diameter normal bits and then using a large Forstner bit to drill out the remainder. It took 14 hours. Suggestions included coopering, turning the inside on the lathe like a bowl, and filling the smaller holes with lead shot or molten lead. 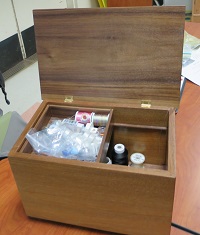 Maria Yan showed a sewing box she made at John Blackmore's recent box-making workshop. The box was joined using a lock miter bit. The box legs were glued and screwed. She also showed a picture of the sewing table she had made. 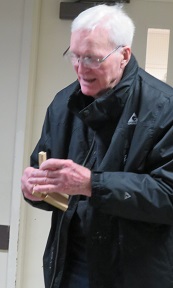 Gordon Juro? described how to make perfectly fitting dadoes by building a fixture that accounts for the width of the table saw blade kerf. 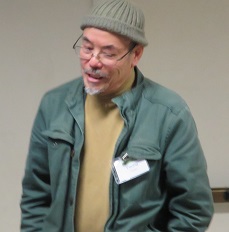 Next, Yeung Chan showed a foot massager he made using cherry wood. The rollers were made using his unique router fixture rather than a lathe.