On July 4th we decided to go and look around the town of Danville, a place I have biked past several times before, but never drifted off of the Iron Horse Trail (a bike trail that runs from Pleasanton to Concord along the route of the old train line that served Danville). We got there after their 4th of July parade had finished but the town was still very busy and much bigger than I expected. I was looking for an old red theater looking building that I had seen from the trail when passing a few years ago - never found it so went for a Starbucks break in the town center. For those of you who know me I am a bit of a Starbucks fan being able to list over 70 Starbucks locations I have visited in the Bay area over the last 20+ years. 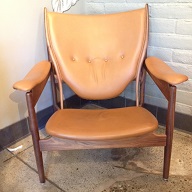 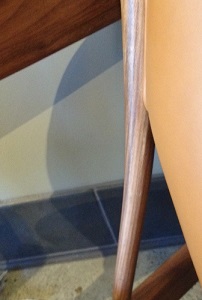 What we walked into was way beyond my expectations; Starbucks is not known for the style/quality of its furniture, I remember reporting many years ago about a Starbucks in San Diego where the new chairs were falling apart as the staves between the back rails had been cut too short and were falling out. I also commented a few months ago about a new Peets Coffee in San Francisco where the natural edged table had been fastened to the metal supporting structure in a way that it was cracking. But the Starbucks in Danville was exceptional (one of their Reserve stores). The chairs were made of solid wood with graceful curves everywhere. 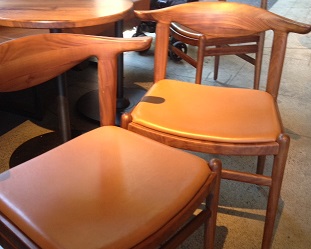 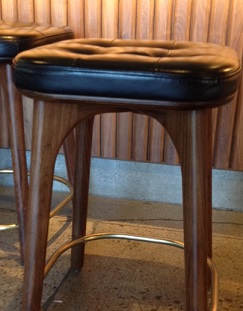 The stools had well shaped wooden legs instead of the old industrial steel look they often use. 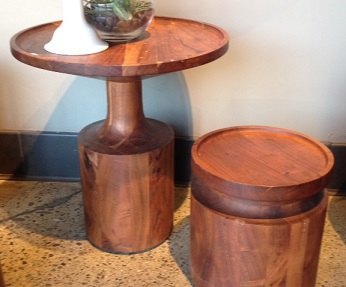 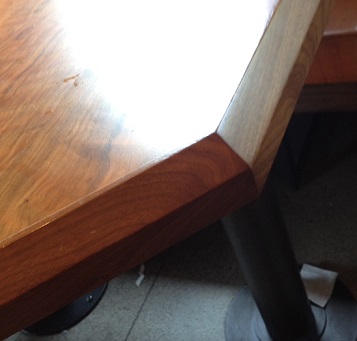 The tables and counters had shaped wood edges.

And even the single stools and tables were very well designed.

I do not know if this is part of their new look or just the look for their Reserve stores but the fittings are definitely in-line with the $5 - $8+ coffees we bought.


PS: I looked on-line when I got home trying to find the old red theater building I was looking for. It was the old Danville Hotel originally built in 1858, destroyed by fire in 1873, rebuilt in 1892, and then made to look like an old fashioned gambling saloon many years later. It then went out of business and stood empty for several years. It was during this time that I saw it from my bike ride - however on the 4th July I could not find it as in very recent times, when it stood in the way of the new commercial developments, it was moved a couple of blocks nearer to the center of the town and rotated 180 degrees. I had no chance of recognizing it - but it shows the advantage of having old buildings constructed of wood.

President Frank Ramsay called the meeting to order at 6:10 PM

August 19th we will have the woodworking show review by the Show judges, John Lavine and Andreas Strieves

November 18th: Larry White talks about career as an artist and a craftsman that has has spanned nearly 45 years including working with Sam Maloof for 27 years.

Silent auction-IDEO is donating a DeWalt table saw which has been hardly used. It will be auctioned on the BAWA website and the auction will close on June 30th.
{The auction closed on the 30th June and raised $260 for BAWA funds. } 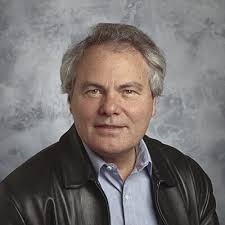 Frank introduced Tim Killen, our invited speaker, whose talk will cover the use of SketchUp as a woodworking design tool. His working title is "From Picture to Antique Reproduction"

Tim's main interest is reproducing 18th century furniture. He goes to Williamsburg every year to look at the exhibits. 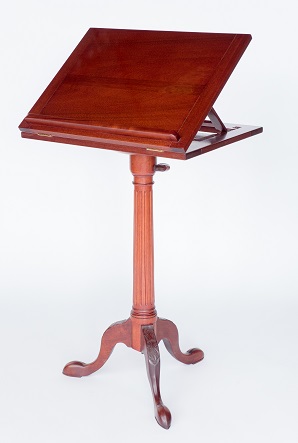 He uses a lot of hand tools and mainly a shellac finish (French Polish). He likes this finish, and even though it can be easily damaged it is also easily repaired.

In addition to authoring two books on SketchUp for woodworkers, he also writes a SketchUp blog for Fine Woodworking magazine. He does not sell any of the pieces he builds, so his house is chock full of furniture….Windsor chairs, Maloof rocker, Chippendale and Williamsburg reproductions.

He is a member of Diablo Woodworkers Association which teaches a woodworking program at the Mt. Diablo Adult Ed in Pleasant Hill. Tim teaches a class on building furniture. Tim always makes a SketchUp drawing for every project he builds. He started woodworking as a child and continued as an adult hobbyist throughout his career working as an engineer. He captures his original drawings from photos or drawings of the original pieces which he then scales up to full size using Sketchup tools.

Sketchup was started by Google but is now owned by Trimble (which is owned by Google). SketchUp 2017 is still available free but that will not likely be the case in the future. 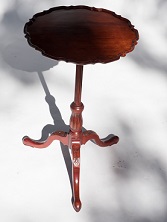 Tim then proceeded to show how to create the drawing of a Sheraton worktable, a piece crafted in Boston in 1790 by John and Thomas Seymour. Although he has good information on the exterior appearance, the joinery needs to be inferred from other sources. SketchUp allows you to make the drawing of the entire piece and then simply copy the parts to make detailed dimensioned drawings as well as exploded views, orthographic views or isometric views. Full size templates, as well, can be printed out and pasted on thin stock. He has made many pieces from Honduran mahogany which he bought several years ago. He likes to acquire the hardware early in the project so he can include the details and attachment method in his drawing.

He alluded to a book on woodcarving by Haslett from which he was able to scan drawings of woodcarvings, and he showed how to convert the scaled drawings into templates for the actual carving.

He then showed how to convert a picture of a cabriolet leg from a Queen Anne chair into a Sketchup 3D drawing by using the Intersection function.

Tim's books are available from Taunton Press in both digital and print form.

You can also see videos of Tim in action on SketchUp at: youtube.com/user/Killenwood/videos 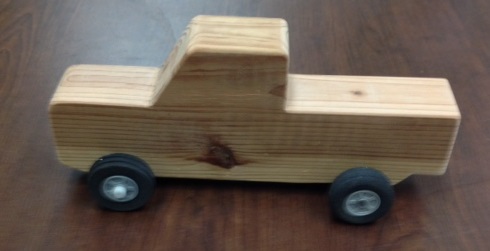 After the break Burt Rosenzweig showed an acrylic cover on a wood base as well as a toy car with a flywheel drive. 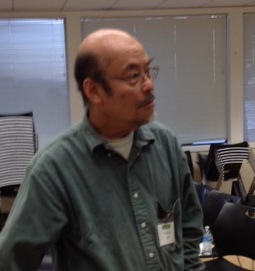 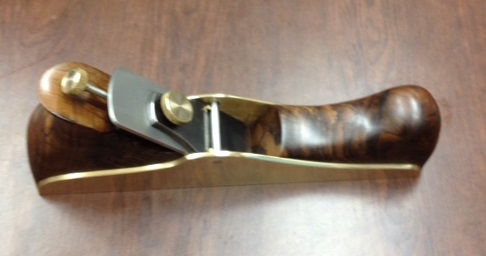 Yeung Chan showed a beautiful handmade plane, in which he designed and constructed all the parts himself. The body was formed from a bronze extrusion. It has a high-speed steel blade and a hand grip made of Claro Walnut.