It is not often that a woodworker gets on the world news, even less frequent when he is related to a king of England.

You may have seen the funeral service for Richard III that was held in Leicester Cathedral recently.

Richard lll was the last English king to die in battle. He was killed in battle at Bosworth Field in 1485, at the end of the Wars of the Roses. As the defeated leader, he was buried in a small church that has long since gone and details of his whereabouts were lost in the mists of time until some researchers, studying old documents, worked out that its location was what is now a car park of some City council offices in the center of Leicester. When they started digging up the car park a couple of years ago they found the body that turned out to be Richard III – that in itself could be a Monty Python sketch: going into the City planning department and asking for a permit to dig up their car park because you think there is a king buried underneath.

In the search for DNA to prove that the body was actually Richard III, it was discovered that a 17th generation nephew of King Richard III was a furniture maker/carpenter named Michael Ibsen born in Canada but living in England. 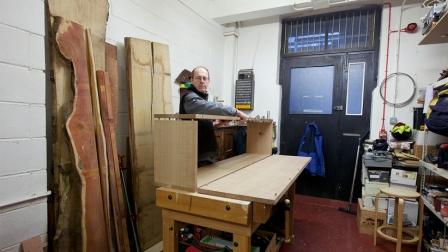 Michael Ibsen in his small 275 sq ft workshop in north London with remnants of the planks of oak he used to make the coffin still leaning against the wall. (Photograph by Charla Jones)

The organization arranging the funeral gave Michael Ibsen the commission for designing and making the coffin. When I first looked at the coffin it seemed a very simple elegant design with no complex joinery.

He acquired six planks of 13ft long, 20in wide and 1.5in thick oak from the estate of Duchy of Cornwall (ie: Prince Charles' lands) and made the coffin 5ft 10in long. The oak was very heavy, requiring 2 people to lift each plank.

But the design is more complex. By tradition people like dead kings are buried in a lead ossuary that lines the inside of the coffin so there is a lot of weight involved. The craftsman making the lead liner had to change his initial design when it was calculated that the weight would be over 220lbs, which is outside the current Health and Safety regulations set for undertakers. So he poured a thinner lead sheet and ended up with a final weight of 130lbs. The elegant design on the outside hides a lot of heavy doweling and screws to make sure it holds the weight.

I was also interested to read that the story had a Chinese connection:

A news report said that in his coffin the smaller bones from his hands and feet will be tucked into linen bags -- each one decorated with a rose representing the House of York, Richard III's family -- sewn by children from the local Leicester's King Richard III Infant School. One of the young pupils involve is a Xi Chen.

There is a genealogy chart in the middle of the article if you want to see if you are also linked to Richard lll: macleans.ca/


PS: I just read that they have recently found the body of Miguel de Cervantes in a tomb below a Madrid convent. He was the author of Don Quixote who died in 1611. Several decades after he was buried he was moved as part of some rebuilding work, and they lost his coffin. So if any of you are of Spanish descent...

President Frank Ramsay called the meeting to order at 7:05 PM.

He announced that Yeung Chan had brought celebratory cookies for Chinese New Year that he had forgotten to bring last month. They were passed around for member enjoyment.

He further announced that John Blackmore has assumed the treasurer position and asked that people verify that they are correctly entered on the membership rolls.

Per Madsen then discussed the upcoming programs:

April 16 meeting will have John Lavine as speaker

June 16 Alan Olson will talk about the educational Tall Ship Building program in Sausalito, followed by a future visit to the site

July 17 there will be a talk by Ron Ashby from Shellac.net

August 20 there will be a talk by Mark Christiansen of Wooden Window, which may be held at their shop in Oakland rather than in Foster City

The October, November, and December meetings are still open, although the 2x4 contest is scheduled for the October meeting.

Stan Booker announced the continuing raffle for the 13-bf piece of maple, which is not quite half way to the $100 goal. Tickets are $1 each or 6 for $5. He also mentioned the drawing for door prizes at the end of the meeting.

John Blackmore announced that Rik Lawrence of Sonoma has bocote and rosa morada to sell for $7.50 per bf, which is quite nice. McBeath is selling it for $50/bf. John has samples if you are interested. 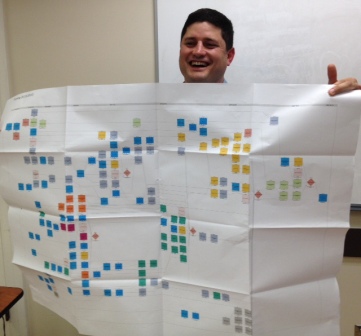 Dan with his "Pull Planning" chart for ourRebuilding together project

Dan Goodman talked about the upcoming Rebuilding Together project, which has been moved to a new date, April 18. It will involve building a deck and a fence at a private residence in San Bruno. Dan passed around the sign-up sheet and asked people to confirm for the new date. We will again be working with volunteers from Cal Water. 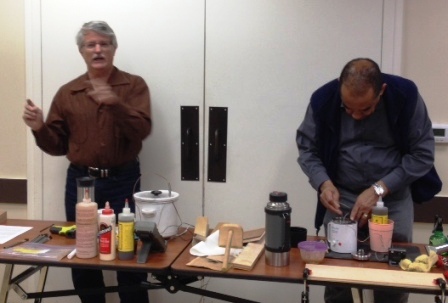 Frank then introduced the featured speakers: club members Neal White and Harold Patterson and their subject of hide glue.

Neal began the show by asking if anyone knew the difference between glue and adhesive. Few hands were raised and Neal promised to tell us the answer at the end of the talk. Neal began by talking about the advantages and disadvantages of hide glue, a material that was used by woodworkers in Egypt 4000 years ago and has been in continuous use since then. It is made from animal hides: cow, horse, rabbit, and fish in China. The disadvantages are that it will not adhere to wet wood and some plastics including hardened PVA glue, and is edible so that dogs and rats will eat it if they find it. The advantages are that it is reversible. To disassemble a joint you only need to heat it above 100 degrees F or apply water. To put the joint back together you only need to add a bit of fresh glue and reassemble. With PVA you need to scrape off all the old glue before reassembly can be attempted, as new glue will not bond to hardened glue. Another advantage is that it can fill gaps in joints to compensate for loose joinery. A third advantage is that it shrinks when setting up so it tends to pull joints together.

Hide glue can be purchased in two forms, dry and liquid. The liquid form is called Old Brown Glue and has some urea added to it to keep it liquid. It needs to be warmed to 110 F before use and takes longer to set up than reconstituted dry glue and is also weaker. As a result it cannot be used for hammer veneering as it takes too long to set up. The is only one vendor for quality dry hide glue, Milligan and Higgins, which sells it in two forms, a powder which is high quality and a less pure version in the form of pearls which has a strong odor. The powder form comes in "gram strengths" which is defined by the penetration depth of a steel rod into a properly prepared batch of the glue. These numbers range from 50 to 500, with strength increasing with number and set time decreasing inversely. A recommended gram strength for joinery and veneering in woodworking is 192 grams. To prepare the dry glue for use, one needs to mix the dry powder with an equal volume of water (Harold recommends distilled water to forestall the growth of molds) and allow the mixture to hydrate for 48 hours. This creates a jelly like mass which can be then refrigerated for medium term storage or frozen for indefinite long-term storage. To use the glue one takes an equal volume of this gel and water and heats it to 140 F in a water bath. The heat source can be a crock-pot, a baby bottle warmer, or a paraffin bath warmer. Any device that can reliably maintain the temperature without exceeding 165F, which will lead to the decomposition of the glue. The use consistency of the glue is like maple syrup. An advantage of the glue is that clamps are not necessary for a strong joint. One only needs to put enough pressure on the joint to squeeze out excess glue and hold it for a minute until the glue cools below 90F at which point it will hold the joint together so that pressure is no longer necessary, Full strength is attained in 24 hours. Splatters on clothes or on the wood can be cleaned up easily with water. After the glue is sanded, it will accept all wood finishes with no blemishes unlike PVA glue, where a wayward fingerprint will show up just as you are applying your finish coat. Setting of this dry glue can be slowed by adding urea or table salt at the expense of bond strength. One can also heat the parts over 90 F and delay setting indefinitely. 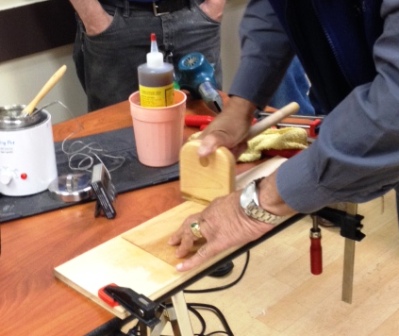 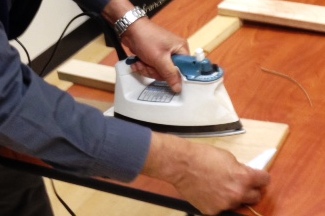 Reworking the venner with a domestic iron supplying the heat"

Harold demonstrated the technique for using a veneer hammer with hide glue to apply a thick shop made veneer and a thin commercial veneer to a substrate. The difference between the two is that a thin layer of glue is applied to the show side of the thick veneer before the back side is put in place whereas coating glue on the show side is not done for a thin commercial veneer. The veneer hammer is rubbed over the veneer surface from the middle to the edge to squeeze out excess glue, continuing until the glue begins to set, sometimes emitting crackling sounds as the hammer is moved over the surface. For marquetry, particularly when veneer tape is used to hold pieces in place, it is better to use a veneer press instead of a veneer hammer.

The enthusiasm of the membership and the detailed questioning of the presenters imply that many have become interested in trying this ancient method in their own shops. Neal then answered his opening question: glue is a natural product while an adhesive is artificial.

The meeting came to an end at 8:45 with the raffling off of door prizes to 3 lucky attendees.