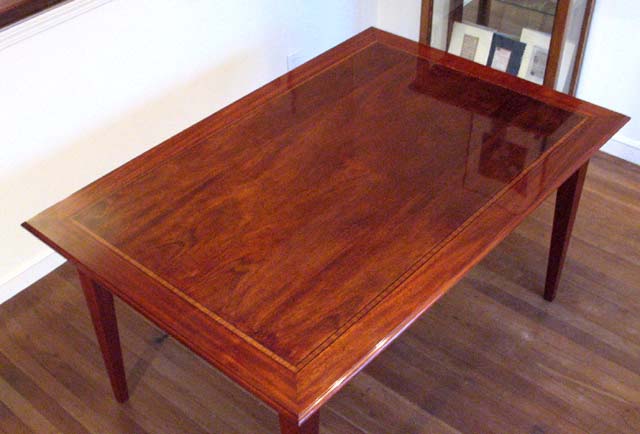 David Heim says "I needed a dining table, so I decided to make a practice piece to try a few things I'd never done before. The table top is 40x60 in. The center panel is African Mahogany plywood, and the rest is Honduran Mahogany. The inlaid cross banding is Sapele which I made up from scraps from the veneering class I took last summer. This worked pretty well except that the width of the black striping I purchased varied ever so slightly from piece to piece. Next time I'll cut my own. The stain was gel varnish colored with Jeff Jewitt's Trans Tints. The tinted gel varnish also works great as a glaze to even out any color variations if needed. The African Mahogany did stain slightly unevenly, but it was not visible until the finish coat was applied. The finish coat was 6 coats of a high solids varnish which was sanded level between coats. I wanted to try rubbing it out to as high a gloss as I could so after it cured for a month, I started polishing with pumice, rottenstone, and progressively fine autobody abrasives. This is a LOT of work by hand; I'll use a power buffer next time. As usual I learned a lot on the project. Hopefully, with a practice piece under my belt, I'll be able to repeat the table without the flaws which don't show in the photo." 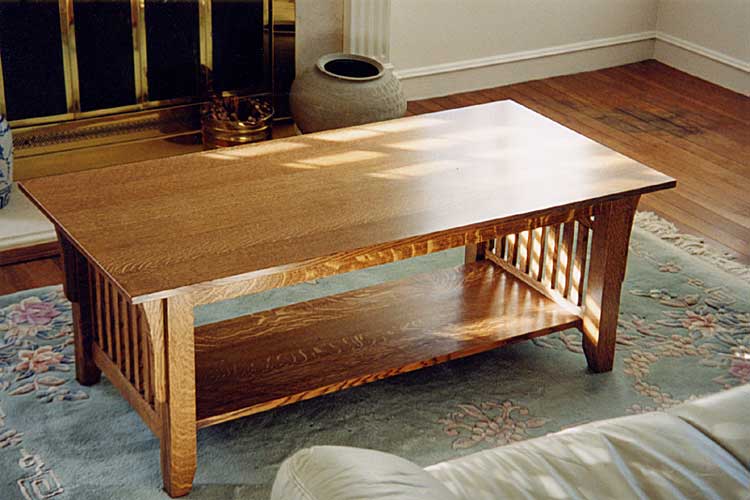 David Heim says "A friend's wife wanted an Arts and Crafts inspired table. I'm a beginning woodworker in need of practice and made my friend a deal. He bought the wood and I made the table. I learned so much, from joinery to finishing. I had only one moment of complete panic. This was a custom piece, and I was not working from a plan. I'd glued up the ends, and when I dry fitted the entire assembly I was startled to see that I'd put an extra mortice in each leg where none was supposed to be. After a day or two I figured out that I could plug the mortice, cut some matching quarter sawn veneer, and cover the whole side of the leg. It worked great, and I wished that I'd done both plane sawn faces of each leg that way so as to get nice quarter sawn grain on all faces of the legs. In the end, my friend's wife was very pleased, as I was." 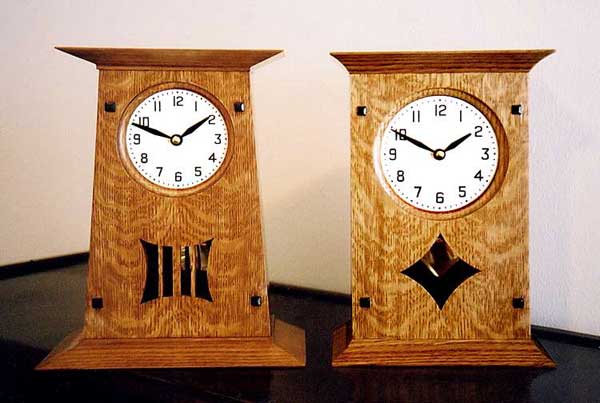 David Heim says "These are two clocks for friends I made from some white oak left over from a previous project with ebony pegs. I found a great resource for clock dials: www.clockdials.com He has many hundreds of styles which he prints on various substrates at diameters every 0.05 inch. The other clock dials I found only came in a few sizes, none of which would fit the size clock I wanted to make. "