I built a gate in 2003 for a house in Menlo Park. I took the following two pictures today, seven years later. The gate is still in very good shape. The joints are tight, there's no sag, and it looks like it will last for a long time. I attribute the durability to many things I did in design and construction, which I detail after the pics.

People often cheap out on gates, and the gates reveal that attitude after a couple of years. This gate is built just like an entry door -- real joinery, careful design, and good craftsmanship in the construction. That's what is required for a durable gate. 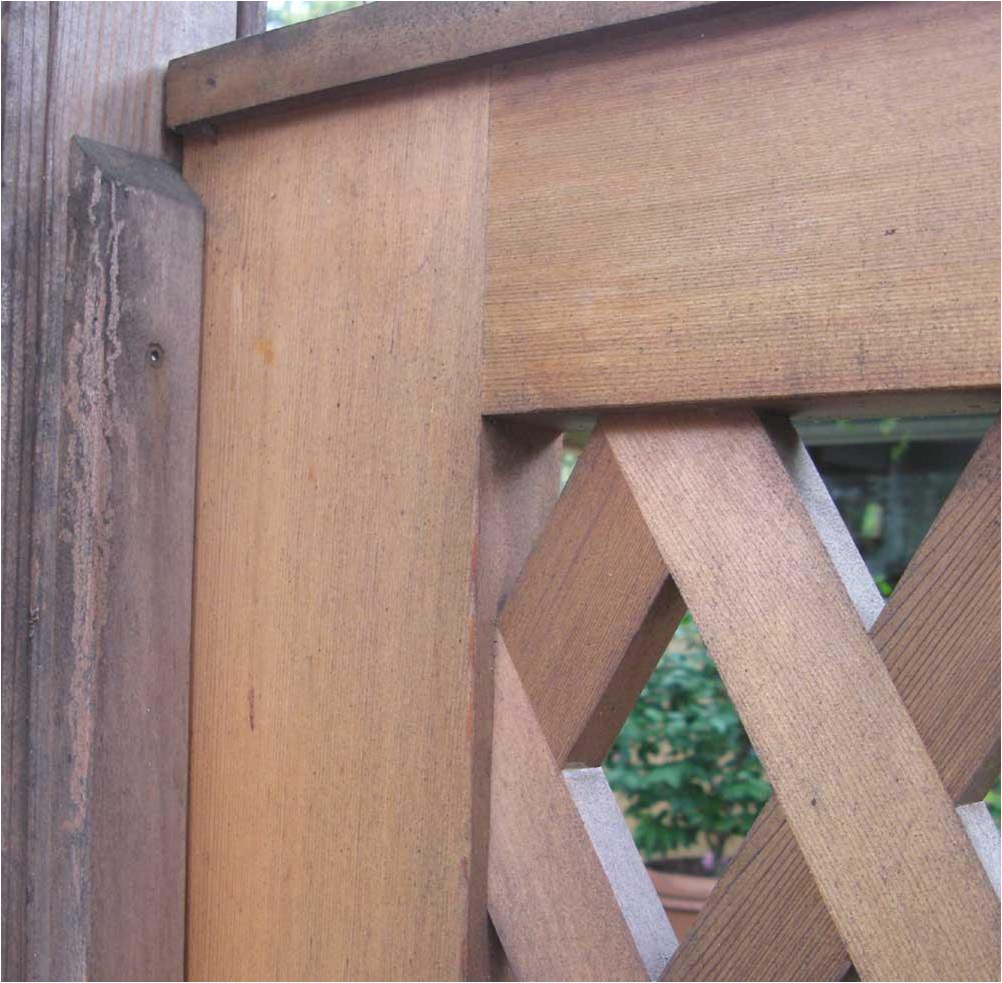 The lumber for the gate is western red cedar. Western red cedar is reasonably weather-resistant. In 2003 at least, it was readily available in this nice clear vertical grain form. I bought this, roughsawn, at PALS for about $6 per board foot. I believe they still stock it. Beronio Lumber also stocks western red cedar, although they might only sell it S2S. This particular stock was called 8/4, and was a true 2" thick. It was kiln-dried, which is important. Dry lumber means that the gate is less likely to warp, and the joinery will stay tight.

The panels in the gate are plywood. The plywood is what I'd call T111. It is a plywood intended for the exterior of houses. The face layer is a fat sixteenth, for durability. The face is generally roughsawn. T111 often has decorative grooves, but it can be found without the grooves. This plywood was called cedar, but I didn't believe it. It was close the right color, but didn't smell like cedar when I cut it. My bet was that it is some exotic. But it looked good when I bought it, and it has lasted well too. I think I bought this at OK Lumber, in San Carlos, but something like it should be available in any good lumberyard.

The panels are made from two sheets of plywood glued back-to-back. The back face of T111 is ugly; the manufacturer expects it to be nailed to studs. This gate is visible from the street and from the house, so it was important that it be good looking on both faces.

The panels are in the gate partly to keep the house private from the street, but also for structural integrity. If you look at many old gates, they've sagged because they have little strength against wracking. The panels do a great job of providing that strength. They are glued in, partly for strength, and partly to prevent water intrusion.

The stiles and rails are joined with mortise and tenon joints. If I recall correctly, the tenons are 5/8 wide or so, two inches long, and almost as tall as the rail. (I cut the mortises with a plunge router equipped with an edge guide. I cut the tenons -- shoulders and cheeks -- on the table saw. But you can use whatever technique you like.)

The glue in the joints is waterproof. It is a urea formaldehyde, Unibond 800. (If you don't like urea formaldehyde, epoxy is just as good. I use West Systems, which is available locally at West Marine.) (I hear the Titebond III really is waterproof enough to use outdoors, but somehow I've never been able to bring myself to rely on it.)

In addition to the waterproof glue on the tenon cheeks, I also put a little bead of caulk on the shoulders of the tenon before I shoved it home. The caulk seals the shoulder to the stile, and keeps water out of the crack. It seems like a small step, but I think it is important. Look again at the close-up pic, at how tight that joint still is after seven years out in the rain.

Wood is okay with getting wet in a rain storm, if the rain just runs off. The wood dries off afterwards, and little harm is done. What kills wood is places where water can sit for weeks at a time, slowly soaking in to cause expansion and loosening of joints, and feeding fungi that can eat the wood. So I was very careful to not leave any pockets in the structure that look upward. For instance, the panels fit into grooves on the sides and top, just like you'd expect. However, at the bottom there's a different approach. I reversed the joint. There's a spline glued into the rail, and it sticks up into a groove in the panel. When I glued the spline into the rail, I could be very careful that it completely filled the groove in the rail, so there are no pockets for water to sit in. For assembly, the groove in the panel has to have a little play and depth in it. That's okay, because if any water does manage to climb uphill into that area, it will drain out the same way, leaving no water to kill the wood. Similarly, the grill is secured to the rail below it by tenons that stick up from the rail, not tenons that stick down into pockets in the rail. This care has helped keep the gate solid for these many years.

On the top of the gate there is a cap, and it is important. The primary purpose is to keep water out of the end grain at the tops of the stiles. If you look at old fences that have stood out in the weather for years, the tops of the posts are weathered much more than anything else. Water easily seeps into the end grain. During wetting and drying cycles, the wetness causes end-checking, and that accelerates the absorption. Putting a cap along the top of the gate provides face-grain to look up at the rain, and is much more durable.

Another issue I often see in old gates is that the gate post has sagged. A gate exerts lots of force over the years, and it sometimes just pulls the gate post over. These posts are pressure-treated 4x4s, set 30" into concrete. After I set the posts and got the concrete mess out of the way, I sheathed the posts with prettier wood. If there were no budget, I would have used more western red cedar. However, the homeowner wanted to keep the cost down, so the post sheathing and the fence are made from construction heart redwood. The "roof" over the top of the gateway is also con heart redwood. I didn't trust glue on soaking-wet lumber, so the redwood is assembled with bronze screws. The bronze weathers to the color of an old penny, and that blends into the color of the wood nicely. These square-drive screws came from McFeelys.com.

There a coat or two of deck sealer on the gate, from Duckback. I think there was the same sealer on the redwood, but it didn't take very well because of the wetness of the wood.