It is not to late to enter

While on vacation this summer we visited Copenhagen and saw the Rosenborg Castle. It is a renaissance castle dating from the 1600's and was the home of the Danish Kings and Queens for many centuries. 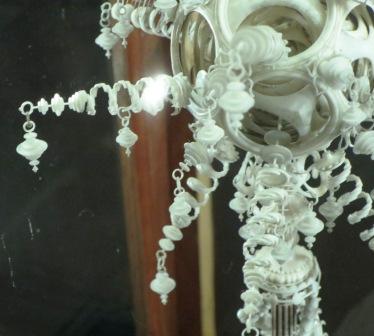 In the basement strong rooms, along with the royal regalia, were some of the most delicate ivory turnings I have ever seen. Many were made by the Kings own turners but some made by Queen Sophie Magdalane (1700 - 1770) who was also turned for a hobby. In one of the grand upstairs room (the Christian VL's room) was her lathe. 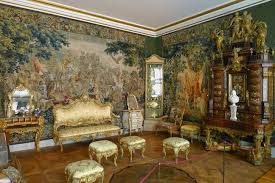 The room was not a typical workshop

The lathe was built into a beautiful bombay chest with false drawers to fit in with the surroundings when not in use. Lift open the lid, swing open the false front and there is a brass lathe with a foot treadle.

For more information on the lathe:kongernessamling.dk/en/rosenborg 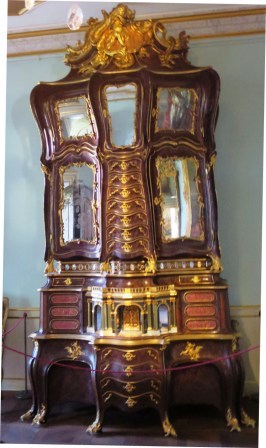 In another room of the castle was a large piece of furniture called Lehmann's Large Musical Cabinet. This was a very impressive looking cabinet which houses a music machine, a bit like a miniature fairground organ built into a wonderful 18th century cabinet.

There was what I can only describe as a wooden sculpture. 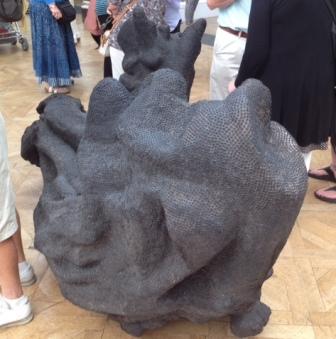 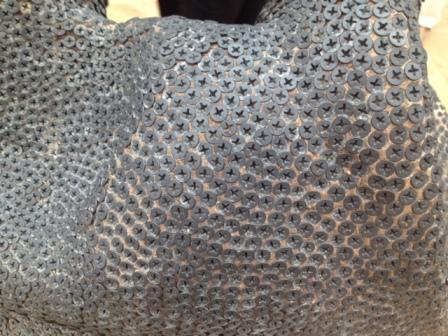 One big amorphous lump of wood painted black. Closer inspection revealed that the whole surface of this object was covered with countersink screws. All I could think of was it would be very difficult to move and, if the owner ever wanted to dispose of it, cutting up would be a challenge. 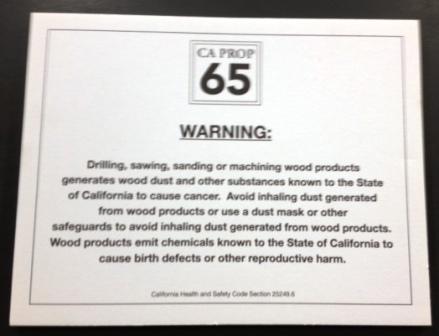 I saw this notice above the rack of wooden batons for painting canvases in Blick the other day. These are batons you buy and just push together. No cutting, sanding, nailing or any woodworking involved....has wood become this dangerous?

The meeting was called to order by President Frank Ramsay at 6:55 PM.

Harold Patterson announced that there will be a Toy Workshop this coming Saturday at Jamie's shop. A sign up sheet was passed around.

There was a recent article on building toy trucks out of 2x4s.

The San Carlos Woodcraft store has indicated that it is interested in hosting a Toy Workshop in its shop space and would donate the wood.

Stan Booker has acquired a long walnut board and 3 book matched walnut pairs from Moore and Newton. Tickets are on sale at the usual price until Stan collects $100 at which time the winning ticket will be pulled. Stan has been cleaning out his basement and has a 5-gallon can each of lacquer and sanding sealer to give away.

Mark Rand announced that Lee Valley has made donations to prizes for the Wood Show and has sent 30 catalogs to give away. 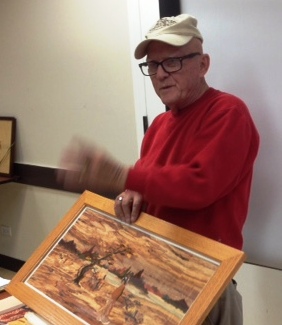 Arnie Champagne was introduced as the first featured speaker.

Attendees were asked previously to bring along .090" thick veneers to exchange at the meeting as well as to practice cutting out designs using the two scroll saws that were brought to the meeting. 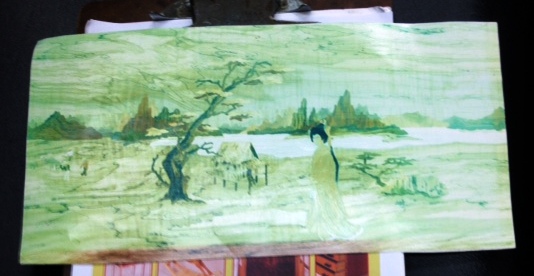 Original drawing for a marquetry picture 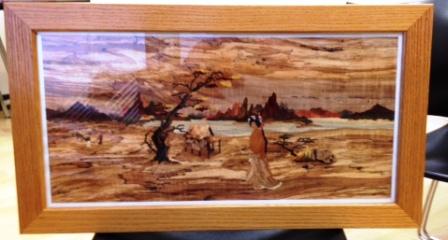 The marquetry from the above sketch 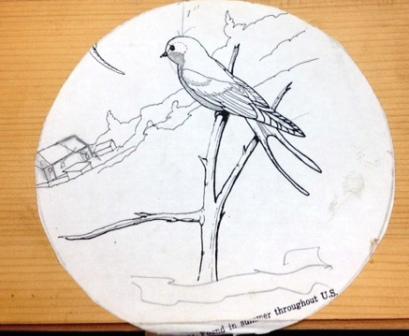 A sketch ready for cutting 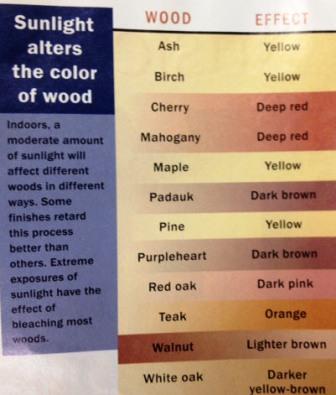 Arnie has collected pictures for marquetry designs over the years from many sources. The only limit to the intricacy of a design is the ability to make the turns on the saw. He showed many examples of the work he has done over the years. He referred to the work of Greg Zahl as an exemplar in the field.

Issues to consider are wood movement, the use of spalted wood for book-matching and double book-matching, wood selection and pattern, all wood of same thickness (he prefers .090" which is much thicker than commercial veneers). If the wood is hard you should use a skip tooth blade carefully. If you cut your own veneers on the bandsaw you should cut in one smooth motion with no stopping with constant pressure. If a veneer warps after it is cut, you can straighten it by putting water on the cupped side. Double-bevel marquetry can by resurfaced and cracks can be filled with Bondo on the back side.

The second featured speaker on the subject was Bruce Powell. 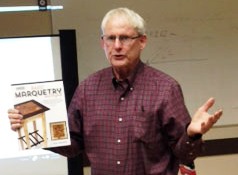 Bruce referred to Ken Horner's book, Basic Marquetry and Beyond. 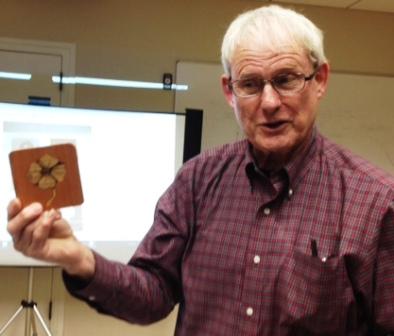 He showed a set of 6 coasters that was straight cut all at the same time, in which the blade is set perpendicular to the table. Bruce uses a Hegner saw, which he thinks is the best one for marquetry. He suggests using veneers 5/64" thick covered with clear packing tape. He used sand shading to color the flower petals and black glue to fill small gaps. If you use thin commercial veneers, fine details can lead to problems of tearout. Double-bevel marquetry is more suited to thinner veneers in which the saw blade is tilted 6-8 degrees to the table. The tilt used depends on the veneer thickness.

The process is as follows: trace the pattern onto the veneer and cover it with clear packing tape. Drill a small hole (#1 drill) to pass the blade through and saw around the pattern. You can use dyed wood for parts of colorful birds. Gaps can be filled with white glue mixed with sawdust from the back side. For dramatic effect the marquetry design can be set into an oval cutout in a dark veneer. 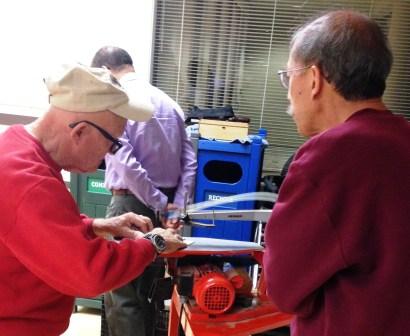 Following the talks the audience spent time practicing with the scroll saws and exchanging veneers.

The meeting adjourned at 9 PM with the drawing for door prizes under Stan's supervision.

The meeting ended at 9 PM with the drawing for door prizes by Stan.