I watched a YouTube video by Hofner on the making of their famous 500/1 Violin Base Guitar, the style used by Paul McCartney; they are made in the Hofner factory in Hagenau, Bavaria near Nuremburg Germany. In these days of automation it is interesting to watch how much hand-craftsmanship still goes into the manufacture.

Hofenr make many types of string instruments using seasoned timber from their large stock of tone woods; some of the veneers in stock are from the 1950's. The timber is first air dried (up to 25 years in the case of their master violins) then, when needed, it is moved into the workshop for a further six months so that it can acclimatize properly before being cut and formed.

The sides and back of the Violin Bass are made from laminated pieces topped with Flame Maple (Spruce is used for the top). The laminated pieces are batched together and bent on forms in various presses and in jigs set into bench vices. They are then manually trimmed on a bandsaw, assembled with poplar corner blocks and a copious amount of yellow glue that the operator ensures is evenly spread by using with his finger. The body is then taken to a router table where the rebate is cut for the white plastic that outlines the body. Once the beading is glued in place a craftsman uses a scraper all round for the finishing touches.

The Maple blanks for the neck are first bandsawed then cut in half and joined with a center strip that hides the steel torsion bar running through the neck. Initial shaping is done, 4 necks at a time, on an automated vertical milling machine following a 3D template before the Rosewood fret board is glued on.

The real craftsman stage is cutting the frets. An old-time-looking woodworker presses a marker board onto the neck to make little marks for the location of the frets. He proceeds to cut them (working very quickly with a fret cutting saw that looks like a small tennon saw), hammers the T shaped metal frets into the cuts and uses a file to clean-up the with a nice rounded edges. He also drills the holes for the pearl inlay dots with an electric hand-drill, no marking needed.

The final shaping of the back of the neck is done using a knife. The holes for the tuning pegs are drilled, then the neck is hand fitted into the body before the neck and body are separately finished. The guitar is finally assembled, strings and electronics fitted, tuned and ready go.

Interesting to watch - an area where machines are used but craftsmen are still needed.

You can see the video at: youtube.com/watch?v=xADoIFoKa0Q

Frank Ramsay, BAWA's president, called the meeting to order shortly after 7pm with a resounding thud of the gavel. The raucous gathering hushed and guests were introduced.

Melisa (Melissa?) hails from Brazil and found us on the web.

Kevin is a garage tinkerer and his kids have grown up and he is now returning to woodworking.

John Ravella, a new member, is attending his first BAWA meeting. Welcome all.

BAWA will hold a Board meeting prior to next month's regular meeting. The topics will be a proposed dues increase and other revenue producing ideas. Currently club expenses exceed the revenue produced by member dues. Members are welcome to attend to voice their thoughts. It will begin at 5pm in the north lobby of the Foster City Recreation Center.

The upcoming BAWA schedule for the regular meetings is:

June: Chris Gaston, Tom Gaston's brother, talking about Inuit carved cedar front doors crafted in the Northwest and the resurgence of woodcraft in the area. We will have a show and tell of previous work presented for the 2 x 4 contests.

Members are asked to bring boxes they have previously made for the box contests.

New BAWA postcards, designed to promote the club are available for members to take for distribution to friends and others.

The Hyde Art Guild has sent a letter to the club asking for entries to its show in December. Frank Ramsay has participated in the past and can answer questions if you are interested. 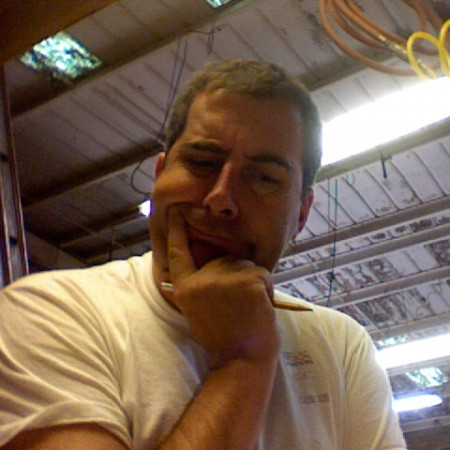 Our presenter tonight is BAWA's own Mike Bray who is talking about the use of powered circular handsaws and track guided power saws for cutting sheet goods with precision and accuracy. 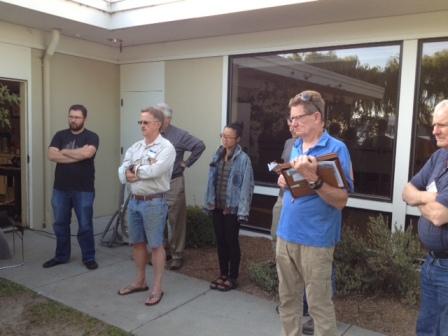 Mike set up his cutting demonstration on the lawn outside our room at the Foster City Recreation Center. Chaos encircled us. The center was holding a dinner/dance. Throngs of well dress patrons descended on the center. The parking lot was packed and roving cars jockeyed for spaces to park. Somehow Mike was able to find space near the curb and with BAWA member assistance, unload his wares for the presentation.

His tools for the evening included a Skill saw, a Makita track saw and tracks, several jigs and the always indispensible blue masking tape.

The first jig Mike showed us was one for accurately cutting dados and 90 degree cuts in narrow boards. It looked like a shooting board but was modified to accept a skill saw sliding along the longitudinal axis. The angle between the vertical and flat surfaces had been corrected to exactly 90 degrees with blue tape.

The next jig was a large flat panel with a guide strip along the front to hold a panel flush. Two small blocks were attached at the end of the panel, one at the front and the other at the rear, positioned so that the perpendicular cut line would be exactly 90 degrees to the front guide strip. It too was shimmed with guess what, blue tape. Bruce Powell suggested that old business cards could be used as shims. He has saved his old ones from his numerous, but now defunct business endeavors. BAWA has old business cards available for this purpose. See Frank. 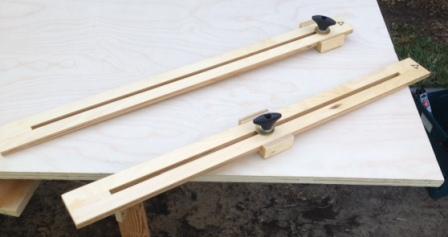 After jigging our curiosity, Mike proceeded to his demonstration of cutting large panels with the Skill and Track saws. The 48" x 96" plywood panel was clamped to two saw horses and rested on 4" high cauls set across a 24" panel door spanning the two saw horses. He used a panel gauge to find the center of the panel and mark his cut line. The two sections of the Makita track were assembled, the guide rods tightened in place and the track clamped to the panel to be cut. Mike made the first cut, running the Makita saw smoothly along the full length of the track. With the saw hooked up to a cyclone dust collection system, almost no dust was generated. Or was there? Yes, almost no dust; because the cut was only 1/8" deep. Oops, forgot to check the saw cut depth. Let's try again. Set the depth, run the saw down the track. What, it's still attached. Well third time is a charm. Cut is complete and smooth as silk, straight as an arrow. Still no dust to be found. 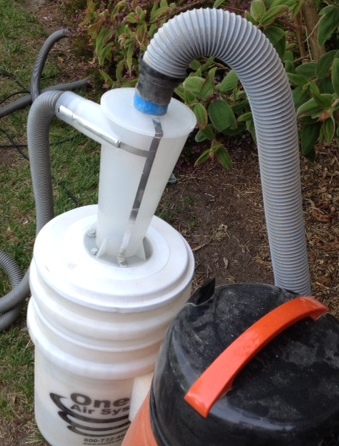 Next came the circular saw. Without dust collection, dust flew everywhere. The saw was guided by the back edge of the track and did not ride on it as the Makita had done. Nevertheless, the cut was clean and straight although not as elegant as the Makita had produced.

Mike concluded his demonstration with a brief description of how to make lateral cuts along the 48" or short dimension of the panel, using only one length of the track. By this time we had attracted a gathering of curious passer-byes who came to investigate the noise and dust. We adjourned to the meeting room for a tech talk by Ken Napior on Shaker furniture.

Afterwards, Jon donated one of his tops for auction, which was won by Frank for $21.

You can see more of Jon's work at: pinterest.com

The Shaker movement gained prominence during the period 1810 to 1865 and followed the Federalist style emphasizing balance, proportion, simple, clean lines with attention to detail and quality. The simple solid wood furniture followed the three P's: plain, practical and made with pride.

The furniture was made from local woods: cherry, birch, walnut and maple. Construction included dovetail joints, mortise and tenon joinery and frame and panel components.

Ken and his wife visited the Hancock Shaker Village in western Massachusetts, taking extensive photographs that he shared with us. The life style in the old village was characterized by communal life and celibacy. 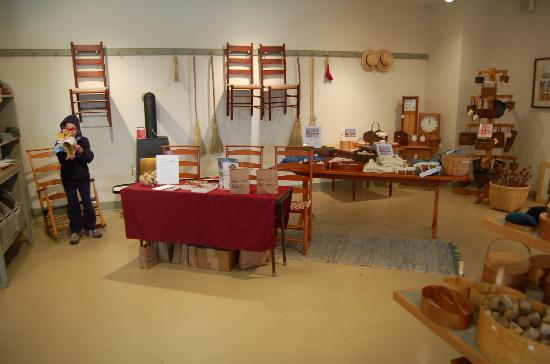 Among the works photographed were built-in cabinets, wall hanging rails upon which chairs were hung during floor cleaning, communal tables and benches. The Shakers made their own cabinet hardware, first of iron, then later including ceramic doorknobs and handles.

One elegant piece was a tilting chair that incorporated rear feet mounted on a ball and socket joint connecting to the chair legs. This innovation was patented.

Shaker boxes and baskets with long overlapping finger joints of bent wood were other staples of their production. 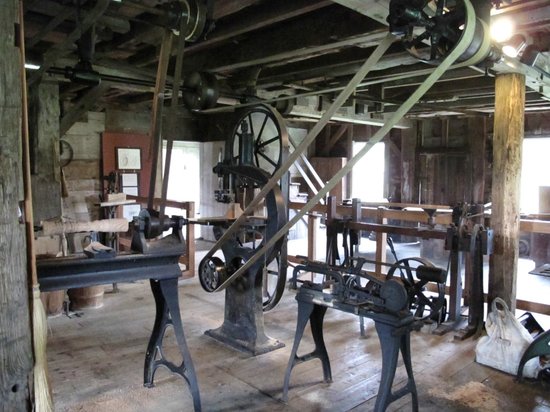 Ken photographed the wood shop showing the belt driven large woodworking machinery. In the early days, the machines were turned by a water wheel, then later converted to steam driven.


The bewitching hour approached and Frank adjourned the meeting.