Maybe the customer's desire for fine furniture is making a comeback?

For several years now the number of people interested in the kind of woodwork we see in Fine Woodworking and at our BAWA Woodworking Show has been declining, ie: Wooden furniture where the beauty of the wood, the joints and craftsmanship are seen as an attractive is part of the piece.

For many years now the market has moved into 2 different areas:

IKEA style: Which is very well designed, functional, manufactured and very affordable but not looking much like handmade, craftsman-style furniture.

Industrial basic style: Where tables are beautiful, thick planks of wood left very much in their natural form just passed through a thicknesses and sander then mounted on steel frame. No real joinery involved. Or old recycled timber used with minimum rework.

The other day while hanging out at a hair salon and looking though all the available reading material I could find I came across a recent home interior decorating magazine. Through all the illustrations there was not a rough hewn plank on angle iron frames to be seen. Instead there were pictures of wooden tables with decorative aprons and detailed, nicely shaped legs, etc. reminiscent of the 1920s. I wondered if this is the future? - short term at least.

At our BAWA Board meeting in December we voted to have our biannual BAWA Woodworking Show again this year but we need your help. The success of very show depends on the work of many members who volunteer to help out with the many tasks such as calling around and persuading people to exhibit, checking-in exhibits, manning the show, helping with the refreshments, etc., etc. However, this team of volunteers needs a leader. We are still looking for someone volunteer to run the team, a Show Chairperson to coordinate the many logistics that need to be in place for the show to be a success. If you would like to be this person and become a major factor in making the show a success then please let me know – your contribution will be very much appreciated.

President Frank Ramsay called the meeting to order at 7 PM.

Per Madsen described the schedule.

Our February meeting will have John McCormack as invited speaker who will talk about making boats and education.

March 17 our speaker will be from the SF Cable Car wood shop who will talk about their activities to repair and build wooden cable cars.

As a reminder the Fine Woodworking Show will take place this year on October 22-23 with an opening reception on the 21st at the Woodcraft store in San Carlos. We need many hands to help out as well as member projects to show off.

Harold Patterson talked about the Toy Workshop activities for 2015 and 2016.

In 2015 many crickets and pencil boxes with crayons were delivered.

In 2016 Harold hopes to have many parts made by members in their own shops with a few group events to assemble and finish the toys.

Frank Taylor is working on a new truck design.

Wood raffle-Stan Booker showed the bastogne board that we got as a gift from WoodMizer and again asked how the club wanted to dispose of it-raffle, silent auction? No winning suggestion came forward. Stan evinced strong interest in trying to make a pair of benches out of it, using the bastogne as the seat. At the end of the meeting Stan was given the board to realize his vision. Stan also brought in some abrasive paper to sell.

Bruce Powell brought is a scroll saw for silent auction.

Alex who has been working with wood since childhood, Sam who was a professional carpenter for two years.

Sam who started woodworking after he finished college. 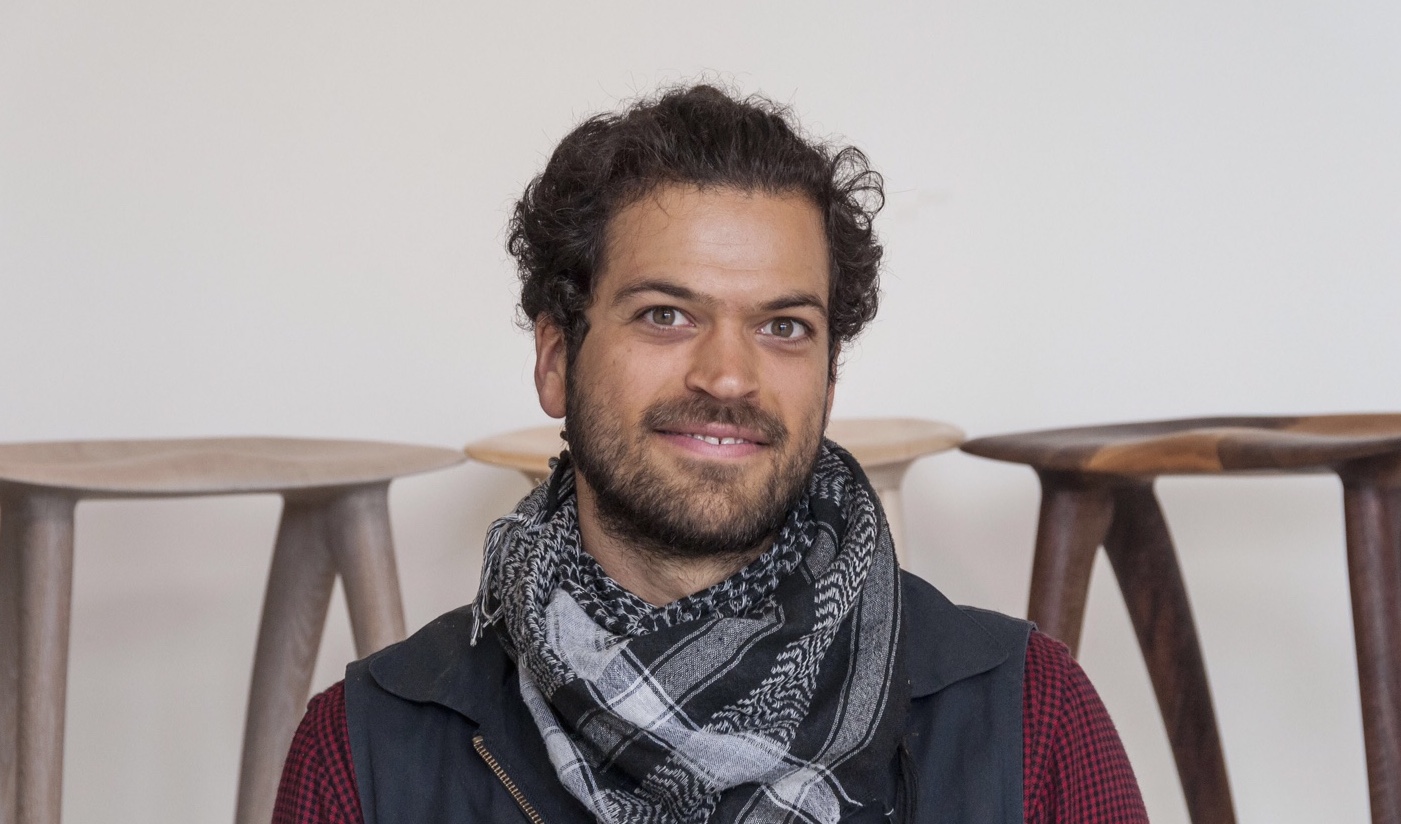 Per then introduced the featured speaker, Xander Bremer.

Xander has been a professional bicyclist and bicycle builder as well as a woodworker. Presently he is an artist in residence a Pier 9 with Autodesk where he has been trying to apply modern CNC machinery to wooden furniture fabrication. He now has a dual appointment at the UC Berkeley Jacobs Institute for the Arts and the California College for the Arts.

One of his design inspirations has been the bridges of architect Santiago Calatrava. After completing a mechanical engineering degree at Columbia University where he got a solid mathematical grounding, he felt that this direction was too limiting and wanted to do more hands on work. After being a competitive bicyclist in college, he decided to pursue professional bicycling for a few years, which led him to build and repair carbon fiber bicycle frames which pay for their lightness by being fragile and breakable. He then joined the Joint Program in Design at the Stanford Product Realization Lab after which he joined the Autodesk program at Pier 9, at which point he began to design and build furniture that could take advantage of the capabilities of the many CNC machines there such as a lathe, a maxijet cutter, and a 5 axis router.

The first project he built is called CAF, which a coffee table with drawers that collapses to 4" tall when disassembled. It lays out completely on a ½" thick sheet of 4x8 foot plywood. His next project was CIRRO, a lounge chair. For this he used paper to visualize the full-scale model. Cherry veneer was used for all surfaces. He used clamps and a vacuum bag to hold parts during gluing. The glue used was West 105 epoxy.

The next project described was the OK desk, which he designed as a mobile workstation with Olson Kundig Architects. It is collapsible when not in use.

As an example of his versatility Xander showed us the Zenith wristwatch that he designed and built using CNC tooling, even building the fixturing using CNC machines.

The next project was the PLANE lamp. It took 36 hours to fabricate 6 Lamps on the CNC equipment.

He then showed the Hans Wegner chair, which was originally made using a duplicating lathe, but is now made on CNC machinery. The process can be seen on a video from PP Mobler.

He then showed the ARK rocking chair, which was fully built using CNC equipment. It has a hand sculpted seat which was 3d captured for the CNC reproduction. All the joinery was done using CNC. The seat was hand drawn and then imported into Inventor. He hand cut the seats at 1/4 scale, captured it in 3d and scaled it up to full scale using CNC. After sculpting the seat again it was again 3D captured. The rockers were made from laminated 1/8" thick slats. The wood used was hard Eastern maple reinforced with aluminum brackets. 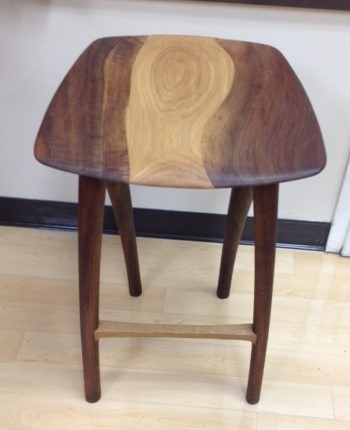 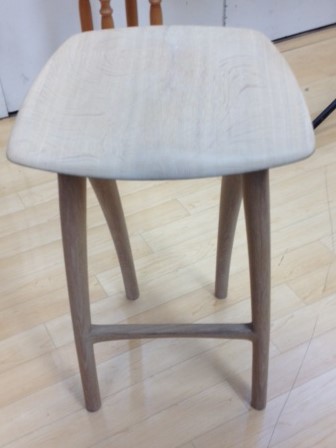 The next project was the Diana high stool. It was first made with traditional woodworking tools and captured by a professional system into 3D. It is built out of oak, walnut, and maple. It takes 4 hours to cut all the parts on the CNC machine and 6 hours to assemble. Sanding is done by hand.

For more on Xander: xbremer.com

After a 5-minute break, Ken Napior gave a tech talk on antique designs. 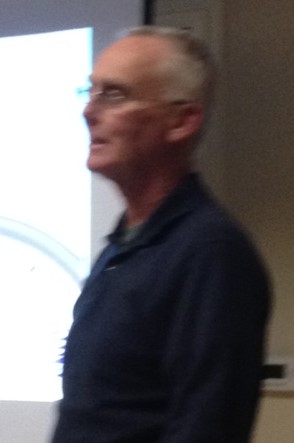 Building cabinets is a lot like building boxes as described by Arnie Champagne last month. Cabinets have a lot of parts and in designing them you need to break them down into pieces.

Ken talked mostly about casework but you need to keep in mind all the parts required during the design process, as there is much interaction between choices. To build for durability you need to take account of wood movement in joinery. Flatsawn wood can move as much as 8%, quartersawn by 4%, whereas there is less than 1% movement in the longitudinal direction. The top sides can be either a single piece or quarter sawn pieces glued together with grain directions alternating up and down to prevent cupping. Joinery can be through or half blind dovetails, or box joints. Keep in mind if the joints will be visible. These joints are easy to glue up square, but use a Rockler Clampit and carpenters square to avoid problems. If things are not square they will never fit together smoothly. Always use story sticks to locate runners to be sure they are at the same height in the cabinet.

For the base, the sides can go to the floor or the cabinet can be set on a molding frame with feet.

John Blackmore showed a mockup of a credenza with sliding doors. He came up with a novel design in which the doors are in a single plane when closed but one can slide behind the other when open. However the mechanism is a bit balky. 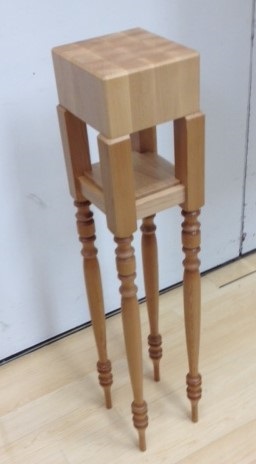 Claude Godcharles showed a narrow four legged stool he made for his son's airline kitchen using 4 stair balusters that he had gotten from Stan as the legs. It looked very sculptural.

Neal White announced that he will be leaving the area permanently and bid us all good bye. We were all sorry to see him go as he has contributed much to the group. After the door prizes were awarded, the meeting ended.