Once again I would like to thank all of the BAWA Board members and Chairpersons who work throughout the year to keep our Association strong.

At our Annual Meeting on November 15th all of the existing Board members were re-elected unanimously. We are not a big organization - but we have 11 meetings a year that have to be scheduled with rooms and speakers booked etc. We also have special events such as the Hands-on-Planing and the Veneering and Marquetry workshops earlier this year plus our 3rd Annual Show. There are meeting notes to take and somehow translated into a readable newsletter. Plus there is the task of collecting annual dues from members (more about this later) and more. It all takes a lot of work by many volunteers to keep our Association running and I would like to thank them for their continuing work.

Talking of volunteers I am looking for a refreshments steward.

About 5 years ago I took on the refreshment task for a couple of months while we found someone to take the job...and somehow along the way the search was lost. All job requires is to provide suitable cookies and hot/cold drinks at the meetings and handle the collection of the refreshments donations. Anyone who would care to do a little extra for our Association should contact me and I can explain the non-arduous duties.

I am trying to decide how perfect is perfect and what is the standard for perfect today?

I am building a table with some very complex milled decorative slots in the legs. Because of the number and depth of these slots they need more than 120 passes with the router to create. Taking multiple passes of each slot until reaching the final depth. I make them on a router table, passing the legs over the cutter several times for each slot. The slots do not extend to the ends of the legs so I cannot make a straight through pass. For each pass the legs have to be lowered onto and lifted off the router bit while it is spinning... this is not a perfect process. Occasionally there is a small "wiggle" at the beginning or end of the pass.

If these legs were cut in a factory on a CNC machined they would be perfect - but that is not handmade.

I may be able to do this by making a very complex set of jigs but as the legs are not rectangular and each slot has a different reference face and other complications - is this worth it for 1 table?

Or are the slight wiggles acceptable for craftsman made legs? - I am not sure.

Per is putting together the program for next year and each year we have a few training sessions.

This year we had the Hands-on-Planing and the Veneering and Marquetry workshops. In recent years we have also had training sessions on Finishing, Tool Making, Hand Cut Dovetails, Table Saw Joints, SketchUp and various other topics. What would you like to see on the training agenda for this next year? Please send any ideas or suggestions you have to Per at : permads@comcast.net

As a reminder it is that time of year again when membership fees are due for renewal except for those who joined since September.

Please can you bring your checks, cash or other tradable commodities to our December 13th meeting or send a check to our Treasurer Marcus at:

(Note: Marcus only deals in US$)

Frank Ramsay called the meeting to order at 7:00pm and called for the annual election of officers. The floor was opened to nominations and no new nominations were received. The slate of existing BAWA officers from 2011/2012 was submitted to the floor for election. The full slate was unanimously reelected:

Frank Ramsay announced that our Treasurer Marcus Miller will make the short annual presentation of our finances at the December meeting.

That concluded our formal Board Meeting

The box contest has been rescheduled to January 2013.

Harold Patterson will be holding a Toy Workshop at Jamie's shop in Belmont on November 17. 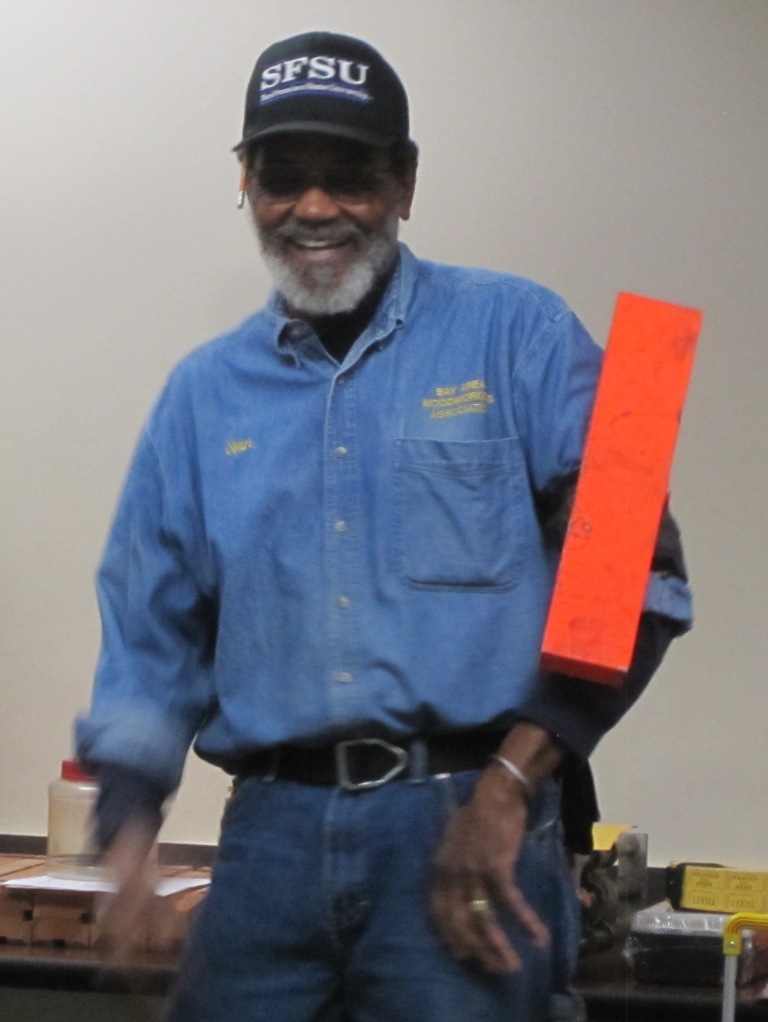 Stan Booker has some beautiful Paduk and Bird's Eye Maple for the raffle. He is shown above modeling one of the nights door prizes.

Per Madsen reviewed some of the upcoming meetings:

On January 17, a BAWA Board meeting starting at 5:00pm will precede the regular meeting. At the January meeting John McCormack will talk about the Wooden Boat School in Brookline, ME.

On February 21, 2013, Bernie Lubell will talk about his interactive installations in wood that evolved from his studies in psychology and engineering. We may get to become actors in our interactions with his creations.

Laura Mays, the lead instructor and new head of the College of the Redwoods Fine Woodworking Program will tell us more about the school and her work on March 21.

Beyond March, the program is still open and suggestions are invited to be submitted to Per.

John Hickman said that a Quilt Show will be held in March 2013 and they are looking for woodworkers who would like to make display frames for the quilts. If you are interested, please contact John.

In the Silent Auction tonight there are two items: a 10" Craftsman bandsaw donated by Frank Taylor and a workbench vice donated by Stan Booker. 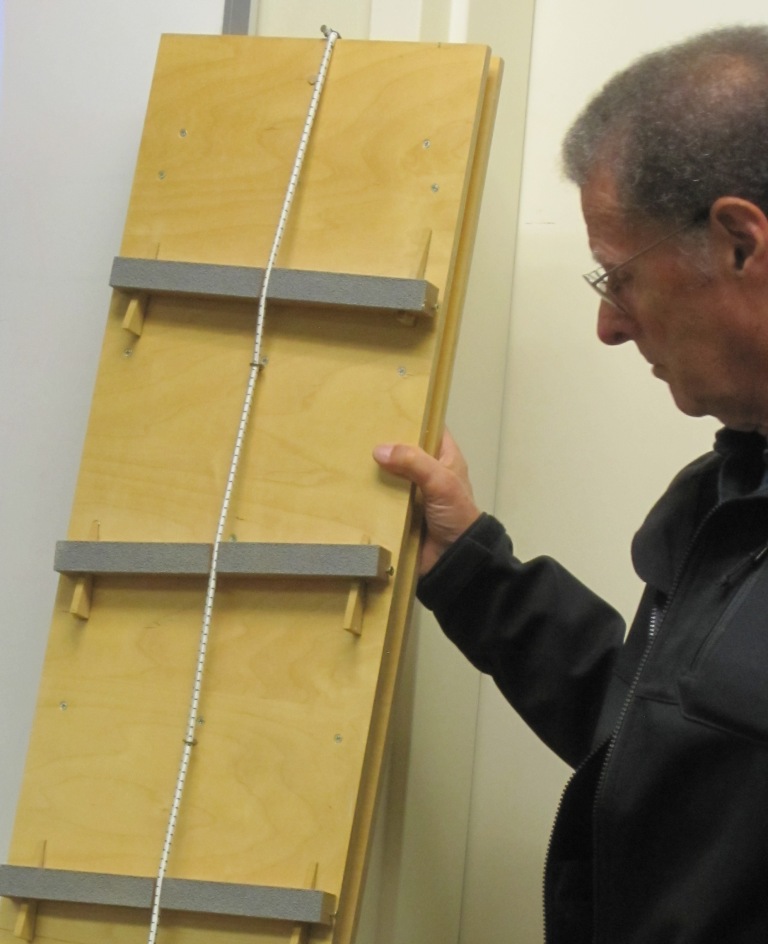 John Wilson showing a planing sled he has made. His jointer is only 6 inches wide, but his Dewalt planer is 13" wide. With a sled, he is able to flatten wider boards. The sled holds the piece to be planed and allows for leveling of the board with the use of wedges. It is a torsion box design to reduce weight. 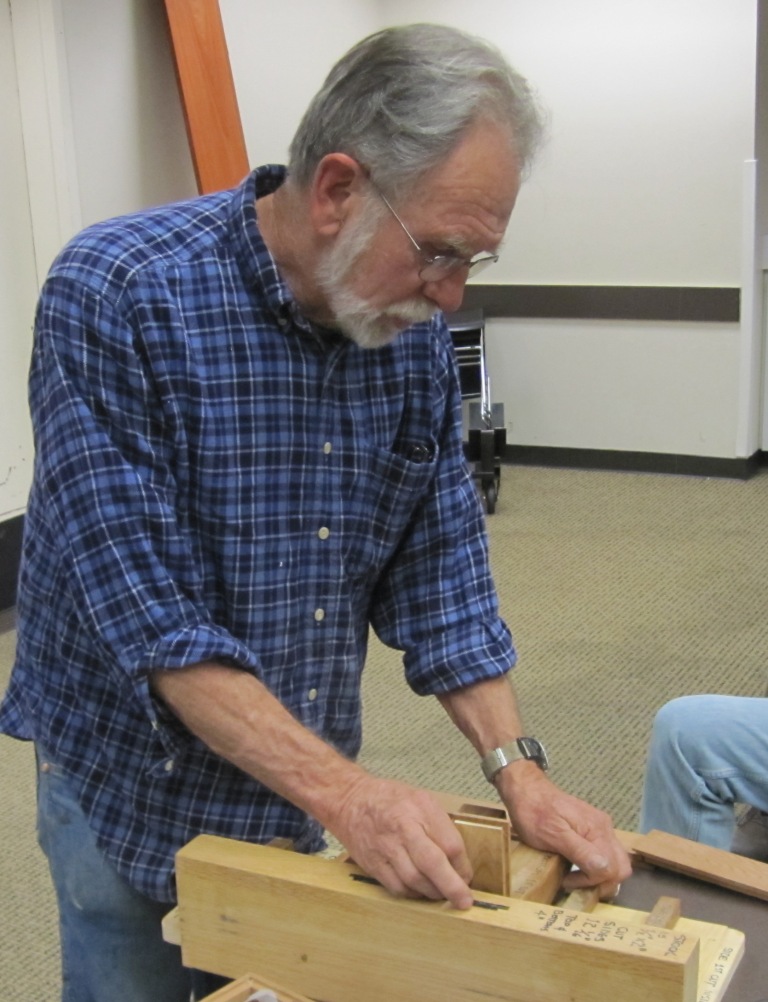 Frank Taylor has been making periscopes and figured out how to cut a series of dados simultaneously on the table saw using this specially designed jig. 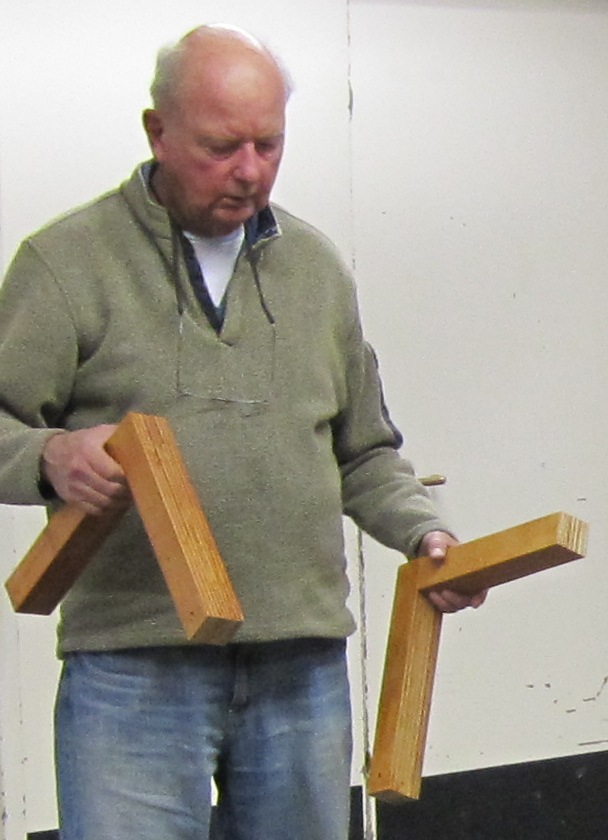 Neal Didrikson made some large plywood squaring jigs to be used in his cabinet making. 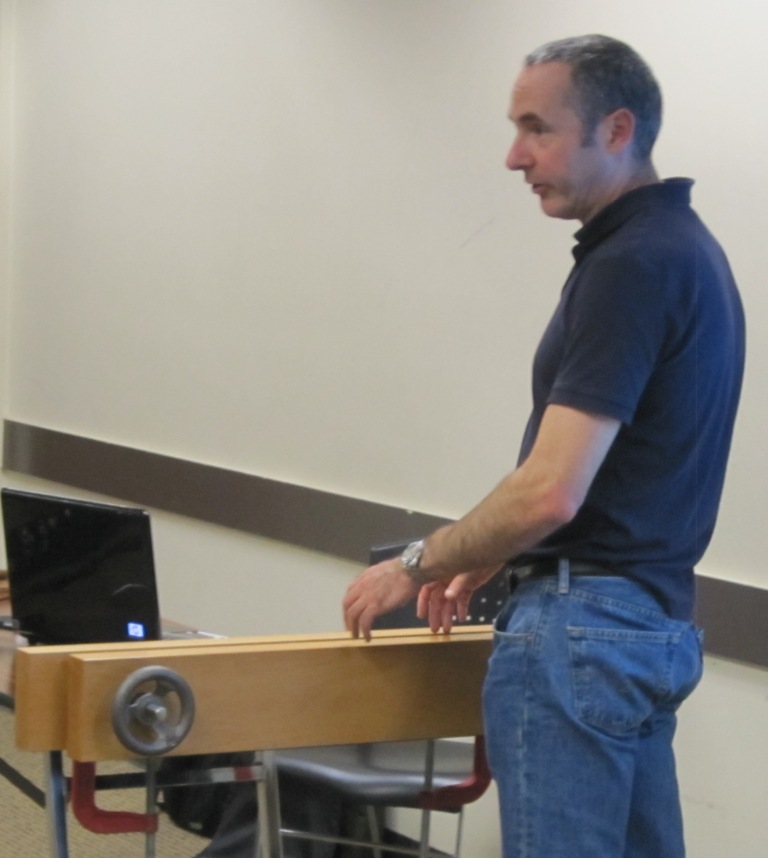 John Seybold made a Moxon based vise to be used on his workbench top workbench top. Used by woodworkers of old, it is approximately 30 inches long with tightening screws at each end. It is especially useful for clamping drawer pieces when cutting dovetails. It raises the working height to a more convenient eye level.

The two judges from the 2012 Annual BAWA Wood Show joined us tonight to review and comment upon the pieces that were shown. Claude Godcharles had followed the judges as they reviewed each piece just prior to the show and he recorded their comments so that participants could receive constructive criticism on the work they had submitted.

Our two judges were John Lavine and Andreas Strieves.

John has been involved in woodworking for more than 30 years, starting Kodama Woodworks in 1980. He is a member of the Bauline Craft Guild and founding board member of the Museum of Craft and Design. He was editor of Woodwork magazine from 1997 to 2008 and is now resurrecting this publication. He received his BA from Yale University.

Andreas Strieves is the owner of Gallery M in Half Moon Bay, CA. The gallery is known as the West Coast's premier wood furniture venue and features work from over 100 well-known local and national artisans. The gallery features pieces that range from kaleidoscopes, chessboards, jewelry boxes, chairs, furniture and wood sculpture. The gallery specializes in customized designed and finely made furniture pieces. Andreas attended Menlo School and Menlo College.

The format of the Show review was to present a photograph of the work piece along with the recorded comments from the judges.

The person who made the piece was then asked to make a few introductory comments about their work, explaining the purpose of the piece and any other pertinent facts related to it. Then the judges shared their comments and explained how they had arrived at their estimation of the piece.

After listening to this dialogue, it became apparent that the judging process could be improved if the work piece was accompanied by a short description of the work. In some cases, the purpose of the work piece had not been well understood and when explained would change the comments rendered about the work. It was agreed that next year, each piece would be accompanied by a short descriptive paragraph.

All of the work pieces presented at the show were reviewed, first those of the participants present for the meeting, then the others. Everyone benefited from the constructive criticism.

The Wood Show was bigger than last year, although it got off to a slower start with many participants coming in the last few days. Next year, we agreed, we will start sooner, and do even better. The judging was excellent and constructive. We thank the judges for the time and effort they so generously contributed.